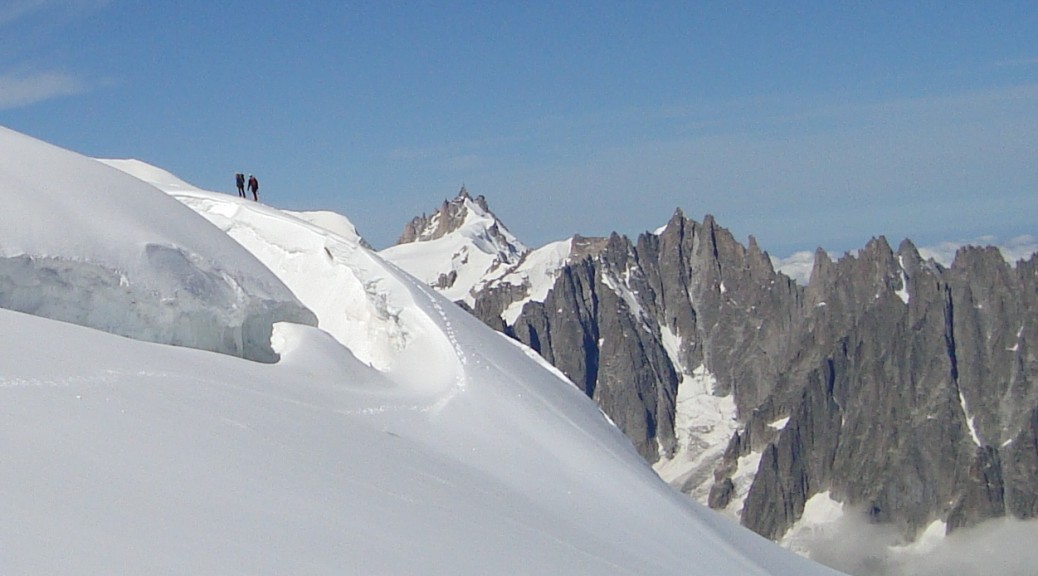 This list has a selection of the best of the easier routes (up to TDinf) in the Mont Blanc and Aiguilles Rouges ranges.  It started out as a simple study to see how many of the same routes appeared in the five selected climbs books written by Lelong and Laroche and published by Glenat.  Some extras from the lower numbers in the classic “100 Best Routes” by Rebuffat were then added.  The table includes the route number in the above mentioned books, as well as  the Alpine Club (AC) guidebooks, (1990, edited by Lindsay Griffin,)  the excellent  “Monte Bianco le classische”  by Bassanini, “Mont Blanc classic & plaisir” by Marco Rosselli (Aug 2012,) and the lower numbered routes from the recent (2012) “Mont Blanc” book by Phillipe Batoux; (possibly the new “Rebuffat 100”. )  Lastly some of  the easier routes from the 2016 Rockfax guide were added.  There is also a list of other selected alpine climbs books in the Mont Blanc Range that are not referenced in routes table.

By clicking on the name of the route you are linked to a route description in English on the camptocamp.org. (C2C) site.  (Two still left to do).

People wanting further information on any of the routes can consult the relevant book, for example, at the Office de Haute Montagne in Chamonix, (limited photocopying possible.)

C2C is a “wiki” type site and is dependent on being well used.  It is to be hoped that other people will produce similar “selected climbs” lists for the harder Mont Blanc routes and for all the other major Alpine areas, as these provide a good gateway into the fantastic resource of the C2C site.

Take care with the snow and ice routes and some of the mixed routes.  Some of these are no longer practical in summer, e.g N face of the Portalet, due to lack of permanent snow.  Check the “linked outings” on C2C, or at the OHM, or with hut warden first.

N.B.  The routes in the list are ordered geographically and by hut.

Mountaineering in the Mont Blanc Region